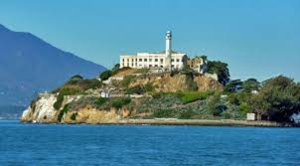 It's time for another fun and educational virtual field trip.

It is Monday, April 27, 2020 and today’s educational virtual field trip is to none other than San Francisco’s own Alcatraz Island, also known as “The Rock.” The rocky island in the San Francisco Bay makes up 22 acres and is located 1.5 miles offshore.

In 1850, a presidential order set aside the island for use as a United States military reservation. The island was also the site of the first operational lighthouse on the West Coast. The lighthouse was designed and placed there in 1854.

The U.S. Army used the island for more than 80 years--from 1850 until 1933, when the island was then transferred to the U.S. Department of Justice for use by the Federal Bureau of Prisons. The Federal Government had decided to open a maximum-security, minimum-privilege penitentiary to deal with the most hardened inmates in Federal prisons, and to show the law-abiding public that the Federal Government was serious about stopping the rampant crime of the 1920s and 1930s.

Alcatraz was considered the “supermax" federal prison of its day. It could house up to 336 inmates but at its max capacity, it never went over 320 and housed as little as 222. The average number of inmates during the 29 years of service was 260 and on average, the time of residence per inmate was about eight years. Famous prisoners were housed here and 36 prisoners were involved in trying to escape to no avail.
Famous Alcatraz Inmates - AlcatrazHistory.com

On March 21, 1963 Alcatraz was closed down as a federal prison as it was too expensive to continue operating since everything had to be shipped in and improvements were just too costly to make.

Today, Alcatraz is a public museum and one of San Francisco's major tourist attractions, attracting some 1.5 million visitors annually.